Window Rock is a hole that formed in a volcanic wall on a ridge in the foothills of the Jemez Mountains in the Santa Fe National Forest. Look carefully and you can see the Window Rock hole in a wall of black-colored volcanic rock. The rock wall extends to the right side of this photo. Another ridge topped by a wall of volcanic rock is behind it, on the far right.

These volcanic walls formed between 8 and 10 million years ago when lava erupted on Lobato Mesa, the highest ridge in the background. The lava rose up underground through vertical cracks and cooled there before it could erupt on the surface, forming these walls. They are now above ground where we can see them because the softer earth that covered them has been eroded away.

The lighter colored pink hills around it are remnants of a massive field of sand dunes that formed here earlier, between 10 and 14 million years ago, when sand was blown in from southwest. Over time these sands hardened into the hills of Ojo Caliente Sandstone that you see here. The dune deposits can be 650 feet thick in places. 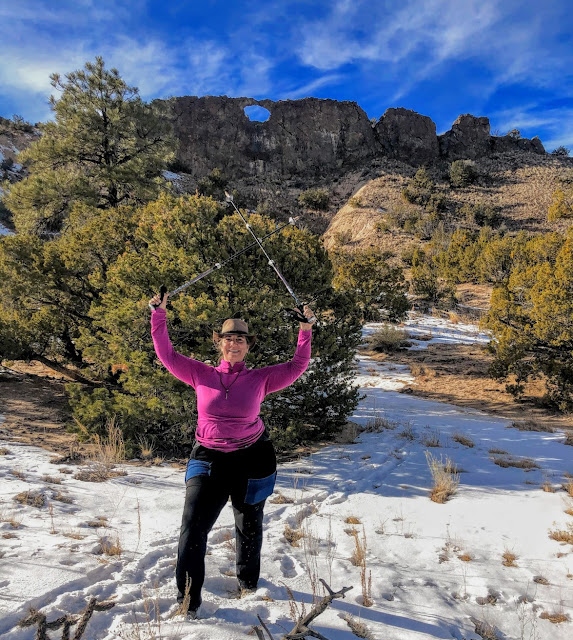 Celebrating a victorious climb to the base of Window Rock.

Geologists call this kind of wall of volcanic rock an igneous dike: "igneous" refers to the lava rock and "dike" is a sheet of rock that is formed when lava cools in a vertical crack underground. 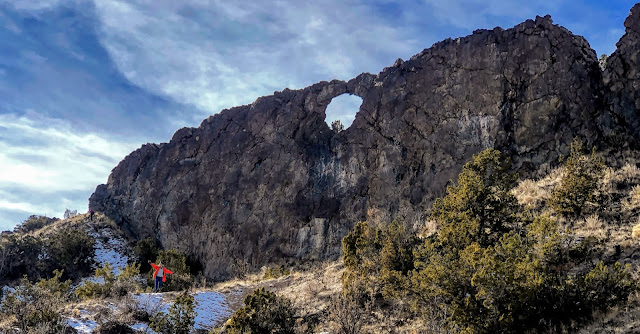 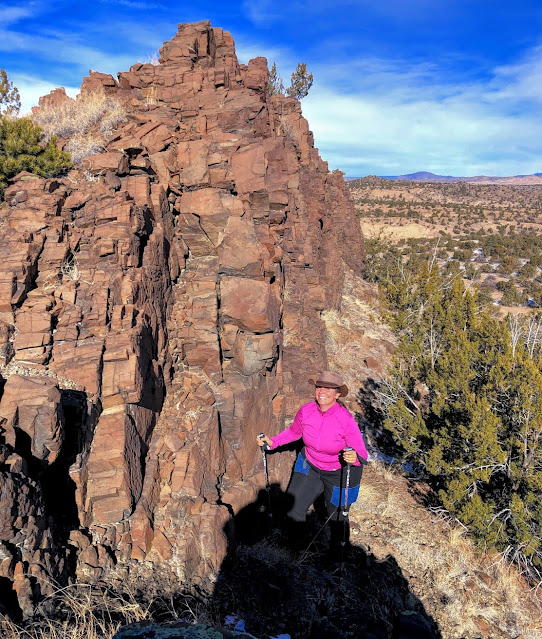 Climbing along the base of the igneous dike. 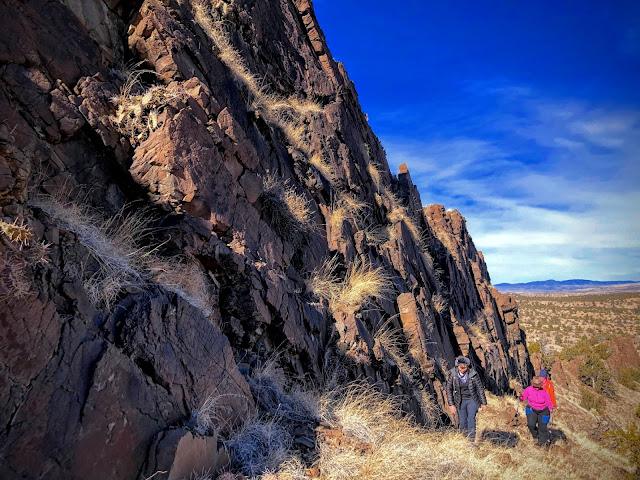 Walls of the igneous dike. 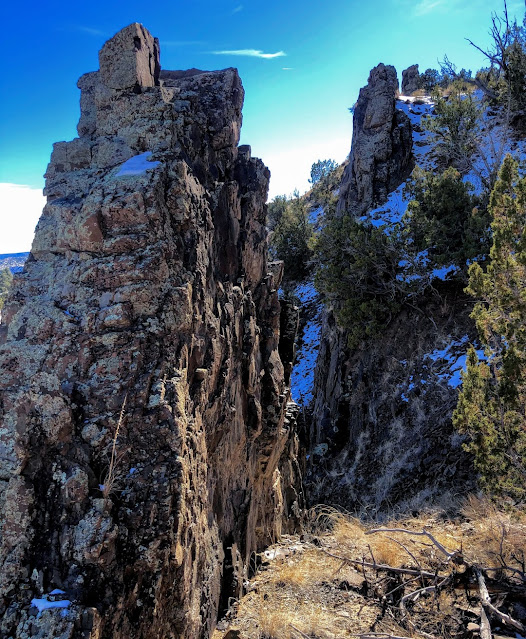 Beautiful exposures of igneous dikes that show the width of the sheet of lava that cooled in an underground, vertical crack. 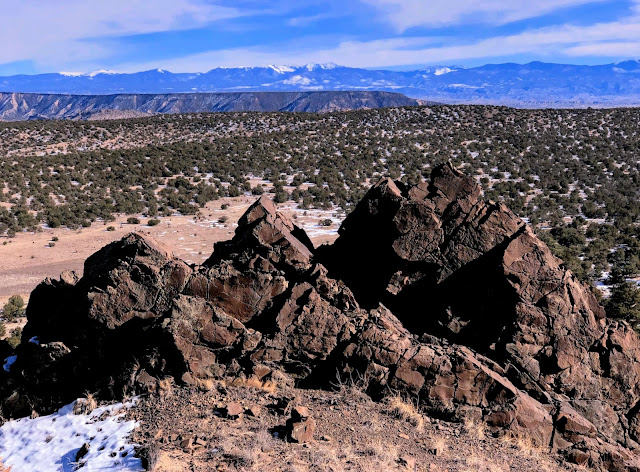 Looking over a dike to the flat plateau of Black Mesa (aka Mesa Prieta) with the Sangre de Cristo Mountains on the horizon. 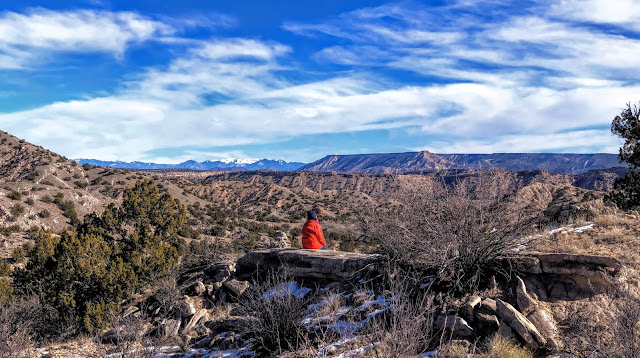 We hiked to Window Rock on the Lemitas Trail, named for a somewhat sour wild berry that goes by many other names, including skunk berries. Here, we are looking past the north end of Black Mesa to the snow covered mountains above Taos. 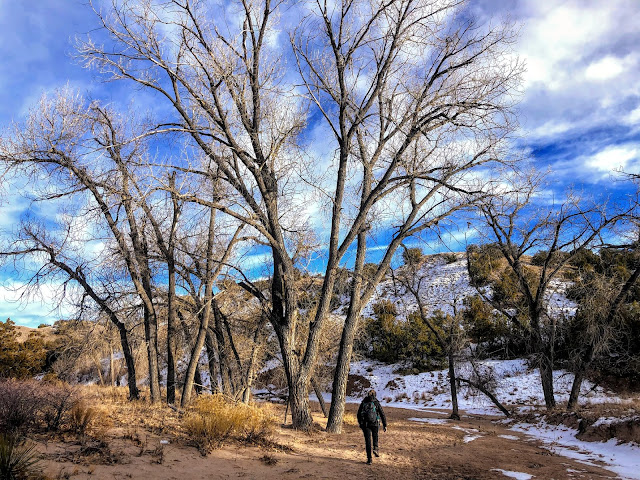 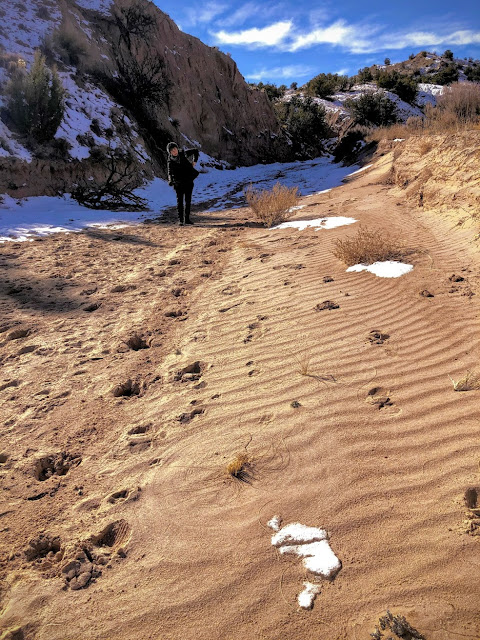 These ripples are in sand that has eroded off the Ojo Caliente sandstone, recreating patterns of the sand dune field that originally created the sandstone. 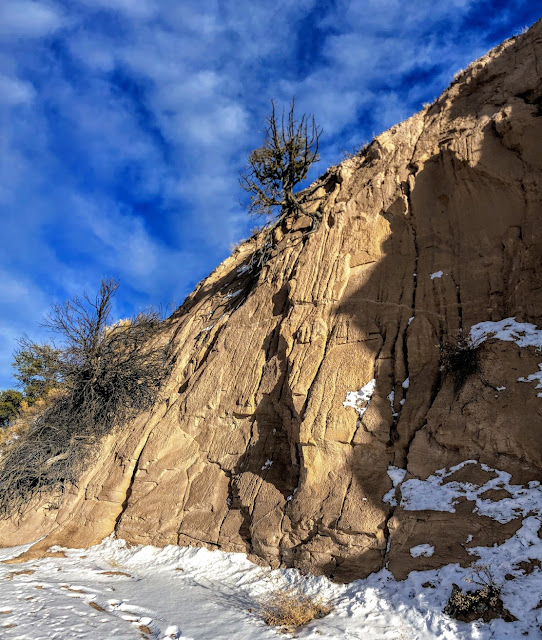 This wall of the arroyo is made of 11- to 17-million-year old silty sediments that were carried here by braided rivers and sheetfloods flowing down from volcanic mountains in northern New Mexico and southern Colorado. These deposits have hardened into a sedimentary layer called the Chama-El Rito Member of the Tesuque Formation.