Showing posts from 2020
Show all

I visited Van Clothier in Silver City in December, 2020 as he was nearing completion of his house in Silver City that uses a form of puddled adobe construction called "cob." The word cob comes from an Old English root meaning "a lump" or "loaf." It's a traditional building technique using hand formed lumps of adobe (earth mixed with sand and straw). Self-supporting, load-bearing adobe walls are built by adding lumps of the cob, one handful at a time, creating a layer that you smooth out as you go. You build one layer on top of another, typically as much as one-foot high per day, until the walls have reached their full height. There's no need to put the adobe into forms and create bricks that first have to be dried in the sun. Since a cob building is one monolithic unit reinforced by straw, it has no weak straight-line mortar joints, making it stronger than brick or block. Walls can be curved and tapered to make them even stronger.  Cob is very
Post a Comment
Read more 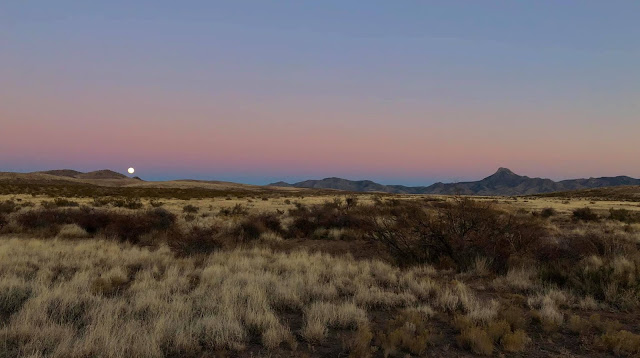 The moon was just rising as we selected a campsite on the floor of the Chihuahuan desert near Cooke's Peak, on the horizon at right. We were 50 miles north of the border with Mexico. We started a campfire immediately as the temperature started to plummet into the low teens on one of the last evenings of December. The next morning we took a stroll in the hills above our campsite. We headed into this draw to see if there were any signs of water. We found bleached bones, and plenty of thorny mesquite and ocotillo shrubs. Then we dropped into a crease in the land, not yet warmed by the morning sun, and found isolated pools where running water had stripped off the topsoil, exposing bedrock. The miracle of water in the desert. Encouraged, the next day we decided to go looking for a cold water spring that was supposed to be in a drainage above Faywood Hot Springs. Running water appeared to be a rare event here. But the tops of tall cottonwood and willow trees, visible to us in the dista
Post a Comment
Read more

Window Rock is a hole that formed in a volcanic wall on a ridge in the foothills of the Jemez Mountains in the Santa Fe National Forest. Look carefully and you can see the Window Rock hole in a wall of black-colored volcanic rock. The rock wall extends to the right side of this photo. Another ridge topped by a wall of volcanic rock is behind it, on the far right. These volcanic walls formed between 8 and 10 million years ago when lava erupted on Lobato Mesa, the highest ridge in the background. The lava rose up underground through vertical cracks and cooled there before it could erupt on the surface, forming these walls. They are now above ground where we can see them because the softer earth that covered them has been eroded away. The lighter colored pink hills around it are remnants of a massive field of sand dunes that formed here earlier, between 10 and 14 million years ago, when sand was blown in from southwest. Over time these sands hardened into the hills of Ojo Caliente Sandst
Post a Comment
Read more

Casamero Pueblo is a Chacoan outlier Great House site located between Grants and Gallup, NM. This two-story Great House was occupied between A.D. 1000 and 1125. It had 22 ground floor rooms and may have had six second-story rooms. It is located 45 miles south of Chaco Canyon, making it a Chacoan outlier community. You can see its walls in the far distance, to the right of the sign, at the base of the bright red sandstone cliffs of Tecolote (Owl) Mesa. The two alcoves just to the right of the sign form the large "owl's eyes" that give the mesa its name. The Great House had T-shaped doorways that are characteristic of Chacoan architecture, one small interior kiva, a great kiva, and two Chacoan roads. Casamero was settled during a time that corresponded with a surge of building in Chaco Canyon – around A.D. 1050. It existed during much of the florescence of Ancestral Pueblo culture in Chaco Canyon, was clearly related to it, and declined in unison with it. When something in
Post a Comment
Read more 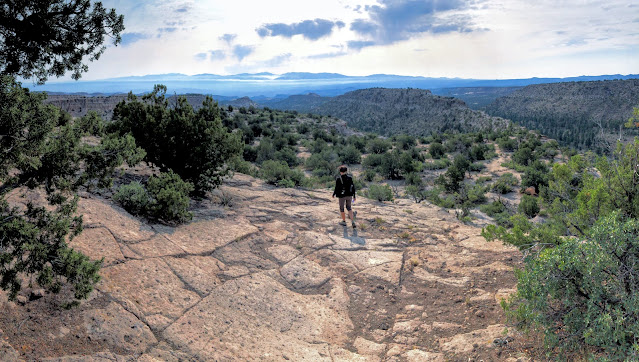 It was early September, the hottest day of the year, when we walked out onto Otowi Mesa , a finger of a ridge that points east from Los Alamos toward the Rio Grande Rift Valley. You can see the valley in the background where a thin blue layer of smoke from forest fires was settling and the temperature was hovering around 100 – it was about 10 degrees cooler up here. Zooming in on the smoke settling in the valley: the mesas in the foreground are where thick layers of volcanic tuff that form the Pajarito Plateau have resisted more than one million years of erosion, which carved down the land surrounding them, forming canyons.  On the horizon, the Sangre de Cristo mountain range is the east edge of the Rio Grande Rift valley.   Below here, Otowi mesa becomes a narrow spine of rock extending off the left side of this photo for several miles.  The same view of Otowi Mesa five months later as the sun was setting on a snowy February day. We literally followed in the footsteps of Ancestral
Post a Comment
Read more
More posts