I visited Van Clothier in Silver City in December, 2020 as he was nearing completion of his house in Silver City that uses a form of puddled adobe construction called "cob." The word cob comes from an Old English root meaning "a lump" or "loaf." It's a traditional building technique using hand formed lumps of adobe (earth mixed with sand and straw). 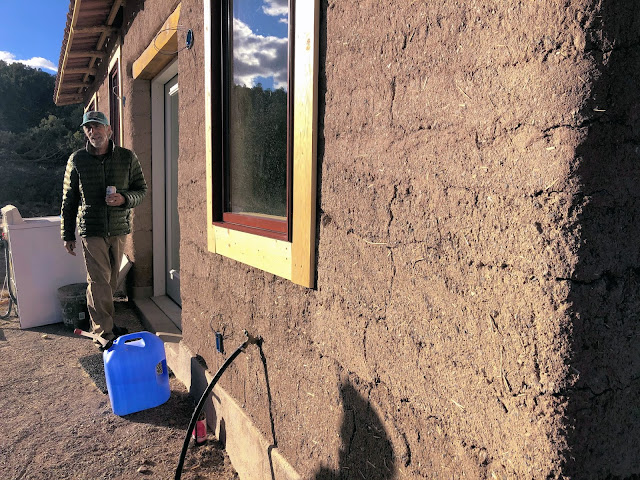 Self-supporting, load-bearing adobe walls are built by adding lumps of the cob, one handful at a time, creating a layer that you smooth out as you go. You build one layer on top of another, typically as much as one-foot high per day, until the walls have reached their full height.

There's no need to put the adobe into forms and create bricks that first have to be dried in the sun. Since a cob building is one monolithic unit reinforced by straw, it has no weak straight-line mortar joints, making it stronger than brick or block. Walls can be curved and tapered to make them even stronger. 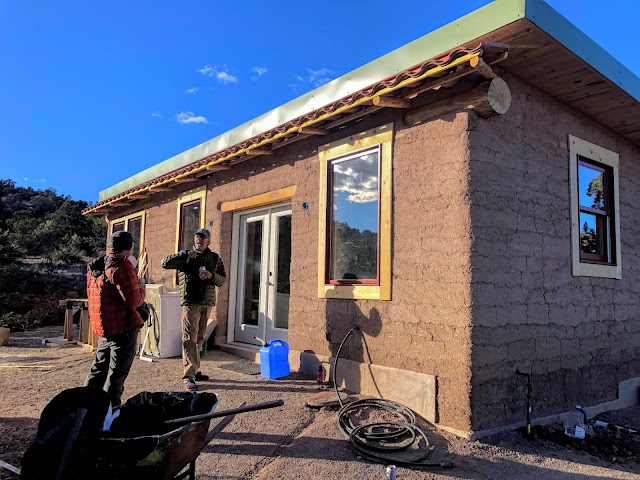 Cob is very resistant to weathering. Because of its porous nature, it withstands long periods of rain without weakening. However, too much exposure is best avoided by adding "boots" (an impervious foundation) and a "cap" (roof eaves to protect the walls). In windy areas, a lime-sand plaster is traditionally used to protect exterior cob walls.

Unlike adobe, cob can be built in cool damp climates like the Pacific Northwest: its resistance to rain and cold makes cob well suited in all but the coldest parts of America.

Cob has been used for centuries throughout Western Europe, even in rainy and windy climates, as far north as the latitude of Alaska. Many of the picturesque stuccoed or whitewashed buildings throughout Western Europe are actually made of cob. In England there are tens of thousands of comfortable cob homes, many of which have been continuously inhabited for more than 500 years. 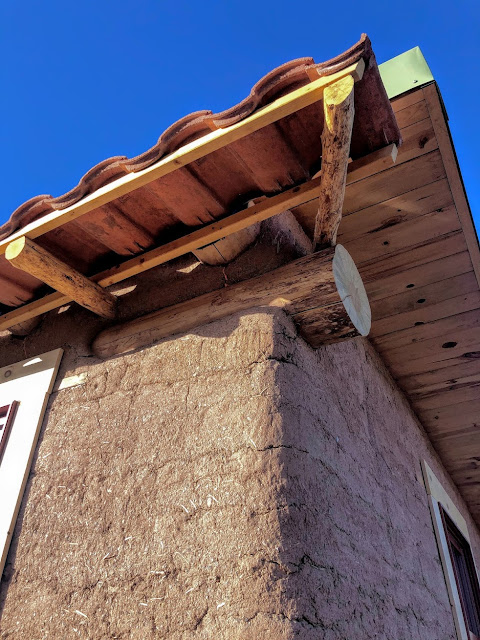 Wood is used to frame openings and for the roof. The large roof beams (vigas) are skinned trunks of ponderosa pines harvested in the nearby Gila forest. Wavy red roof tiles add "eyebrow" to shade windows from the summer sun, providing a design accent that reminded me of traditional Chinese houses.

Cost of construction for this house is $165/square foot. 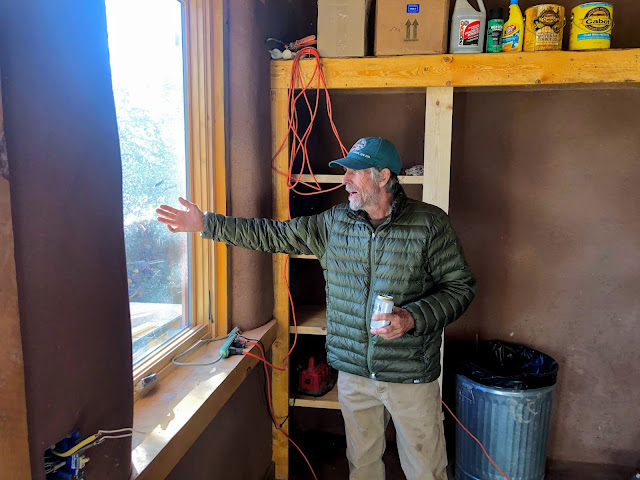 The walls are 14-inches thick, providing immense thermal mass and adequate insulation, ideal for passive solar construction. Pipes and wires are laid directly in the walls while they are being built, and there's no need for sheet rock, tape, spackling, sanding, painting, sheathing, or vapor barriers. 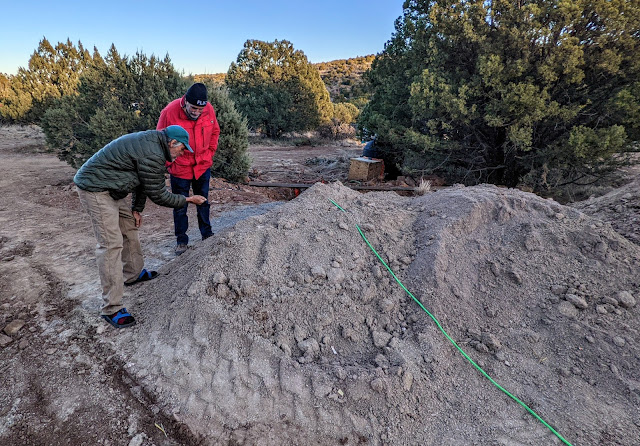 Here's where the adobe is mixed: starting with earth (clay and silt) and sand, plus a blend of crushed gravel of all sizes, from dust to small stones. Adding water and straw completes the mix.

Cob is nontoxic and completely recyclable. This ancient technology doesn't contribute to deforestation, pollution or mining, nor depend on manufactured materials or power tools. 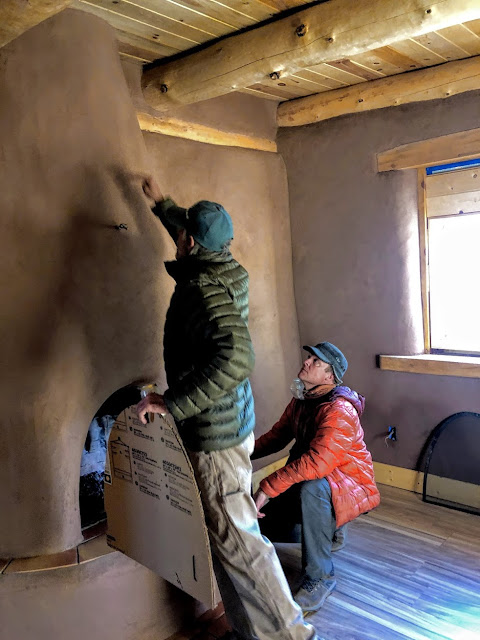 Cob structures require little additional heating in winter and remain cool and comfortable on hot summer days. Because it is fireproof, cob can be used for building ovens, stoves and chimneys. This traditional Spanish fireplace sends heat through its back wall to an adjoining bedroom. 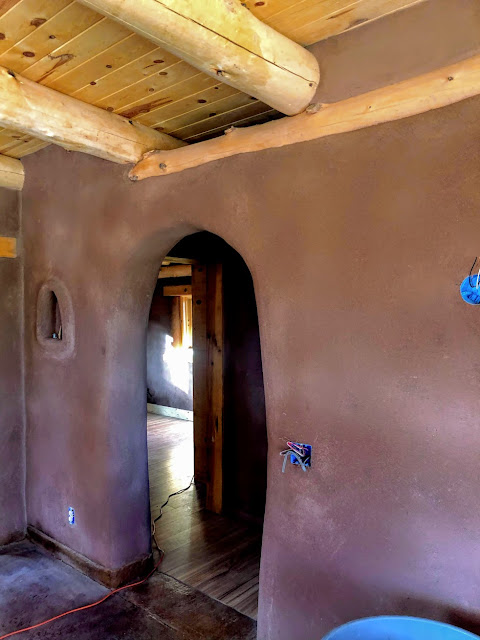 Cob is one of many methods for building with raw earth, the world's most common construction material. It surpasses related techniques such as adobe, rammed earth, and compressed earth bricks, both in ease of construction and freedom of design. Since you don't need straight forms or rectilinear molds, cob lends itself to organic shapes: curved walls, arches and vaults. 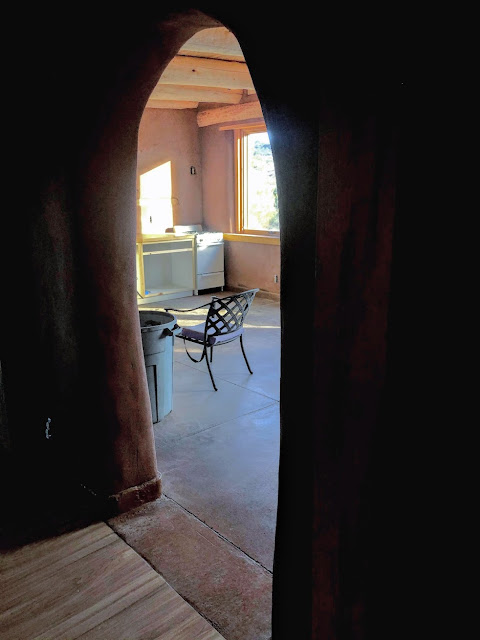 Building with cob is a sensory and aesthetic experience like sculpting with clay. You can add on, cut out, or reshape at any time, even after the cob is dry. 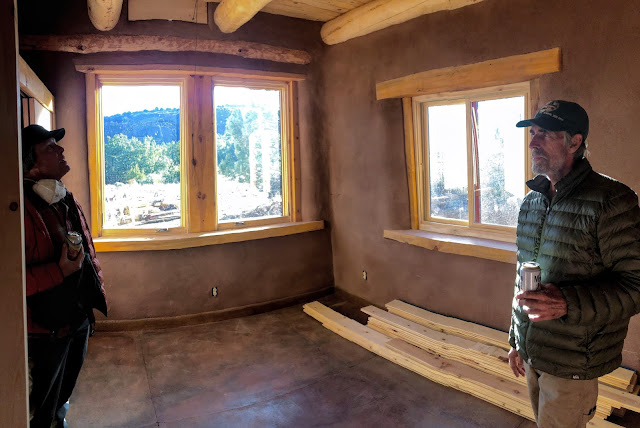 Van specializes in turning runoff and erosion problems into water harvesting opportunities with water harvesting earth works, urban stormwater retrofits, and riparian and wetland restoration in both urban and wildland settings. He has worked extensively in New Mexico and Arizona on a variety of restoration projects with regional drylands stream restoration and water harvesting experts including Bill Zeedyk, with whom he co-authored the book "Let the Water Do the Work: Induced Meandering, an Evolving Method for Restoring Incised Channels."