For several years, I tried to pin down the location of the site of a 1,000-year-old Pueblo village that was supposed to be near my home. Eventually I found it, just 600 feet from my backdoor, on top of the ridge that you see in the background of this photo. This view of the ridge that climbs about 100 feet above my house is looking from the rooftop of my house, and my neighbors' houses.

This pueblo was first excavated by archaeologists in the 1920s, who named it the Arroyo Negro Pueblo. It is considered perhaps the best mapped, although least described, of the Santa Fe River pueblo sites from the Late Development period. Wood cores were taken from structural support timbers of the buildings in 1934 to do tree ring dating.

The Ancestral Puebloans spent 50 years constructing seven buildings up there, from the years 1050 to 1100. The buildings consisted of anywhere from 2 to 25 rooms. Alongside most of the buildings, on the side facing the Santa Fe River, was a round, free-standing kiva-like room. There were also some pit house structures that were part of an earlier village.

Altogether, the pueblo had 60 to 65 rooms, plus 5 round rooms and up to 10 pit structures. Typically, the smaller houses of two to four rooms were occupied by a family of three to eight people. There was one long building that had 25 rooms in two or three rows that could have housed from 30 to 50 related people. 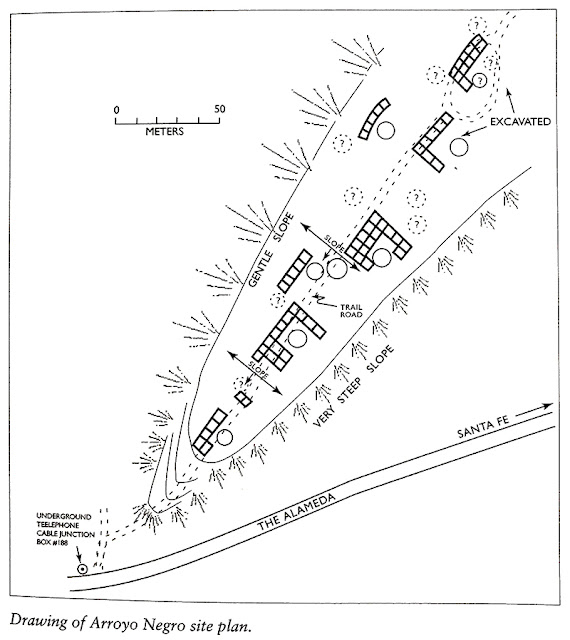 Each dwelling was entered by a ladder through the roof, and the rooms typically measured just 10 by 7 feet. The walls were made of puddled adobe, and were set on foundations of round cobble rocks. Some had hearths for cooking. Back rooms were used for storing clothing and feather blankets, surplus food and raw materials like yucca fibers, personal decorations made from shell, bone, and stone, and other items used in rituals and ceremonies.

People lived in that village for about 100 years, from 1050 to 1150, after which the people in this region consolidated into two much larger pueblo villages (the Pindi and Aqua Fria Schoolhouse Pueblos) that stretched from near this site to a village center located 1.5 miles downriver. 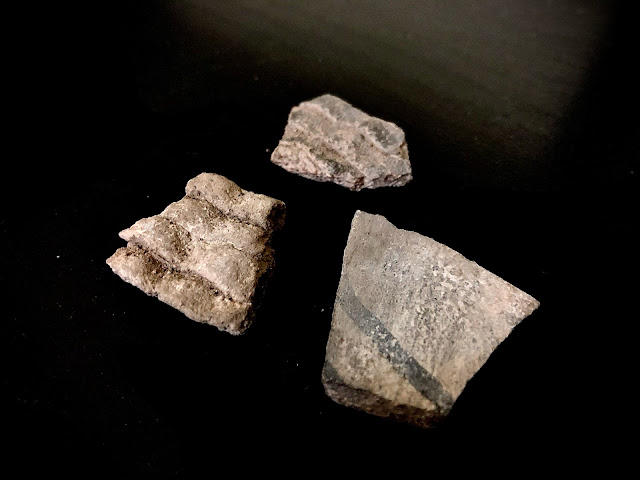 It took me about one minute of looking to find these two pieces of corrugated utility ware pottery, and one piece with a painted pattern, when I visited the site (I'll be returning them to where I found them).