As we started hiking to Jicarita Peak, the 8th-highest mountain in New Mexico, we crossed this acequia (drainage ditch) that captures rainwater and snowmelt flowing down the slopes behind it from the summit of the Sangre de Cristo mountains (we're crossing it here at 10,500 feet). It moves this captured water sideways to the east, out if its natural path to the Rio Pueblo that flows west past the Picuris Pueblo River on its way to the Rio Grande River.

Instead, these diverted waters are carried about four miles to the east, to the top of the Rio Pueblo watershed and beyond, where they are allowed to fall down the eastern slope of the mountains to irrigate farmers' fields in the Mora Valley below. The Mora River then flows east to the Mississippi River via the Canadian and Arkansas Rivers.

This acequia was built between 1879 and 1882 by some of the earliest settlers in the Mora Valley. In 1882, residents of the Picuris Pueblo sued the settlers for diverting water – that had been following the natural drainage, flowing west to them – without their permission.

The lawsuit languished until 1885 when it was derailed by the notorious Thomas Catron, a politician and lawyer who was the leader of the "Santa Fe Ring." This was a group of powerful Anglo lawyers and land speculators that amassed a fortune through political corruption and fraudulent land deals. They gained ownership of vast tracts of land that they had used traditionally by Native Americans, and in held in common by Hispanic settlers, for centuries. At the time he got the lawsuit dismissed, Catron had acquired title to the northern part of the Mora Land Grant common lands, which he subsequently sold to outside investors.

Today, 140 years later, the members of the Picuris Pueblo are fighting to get their water rights back and end this diversion that deprives them of as much as 15 to 20 percent of the water that would normally flow to their Pueblo – water that is in short supply as their wells are drying up, and leaving them without water for irrigation and livestock. Ironically, Picuris is having to buy water from the Mora Valley to augment its supplies. 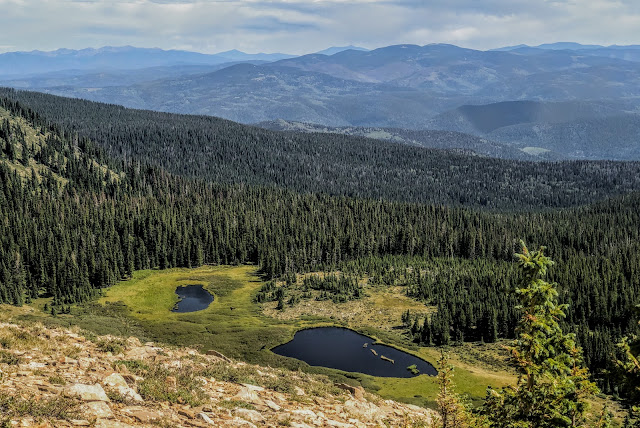 Serpent Lake, at the base of Jicarita Peak, is a source of the waters that are captured by the Rito Angostura acequia shown in the previous photo.

We hiked up 2,500 feet, from just below the acequia to the summit of Jicarita Peak, which is on the ridge on the left side of this photo. Note the cloudburst, in the distance, dumping rain on the Mora Valley at the center of this photo. 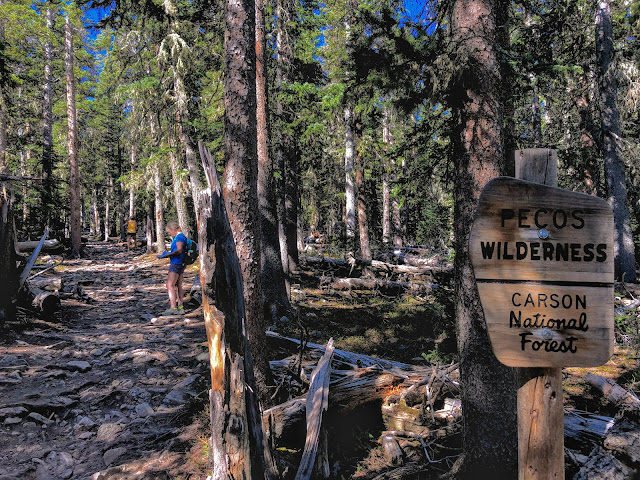 Our hike took us into the northern edge of the Pecos Wilderness.

Snowmelt and rainwater from Jacarita Peak above emerges in this spring, just below the summit. 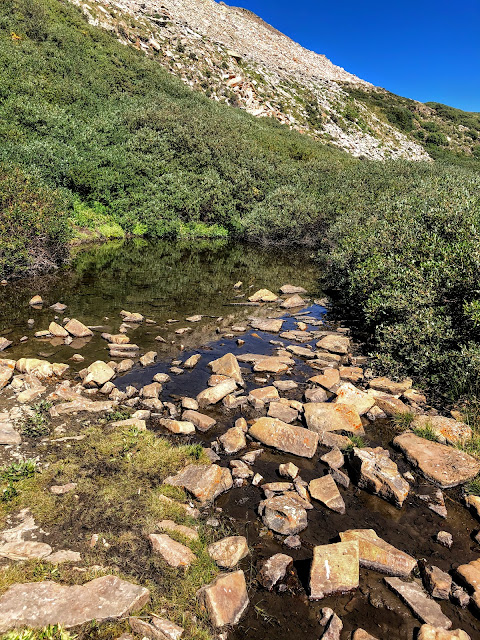 The waters flowing from this spring run down to Alamitos Creek. That creek is entirely diverted by the same acequia system we crossed near our trailhead, built in the late 1880s to divert waters east to the Mora Valley. 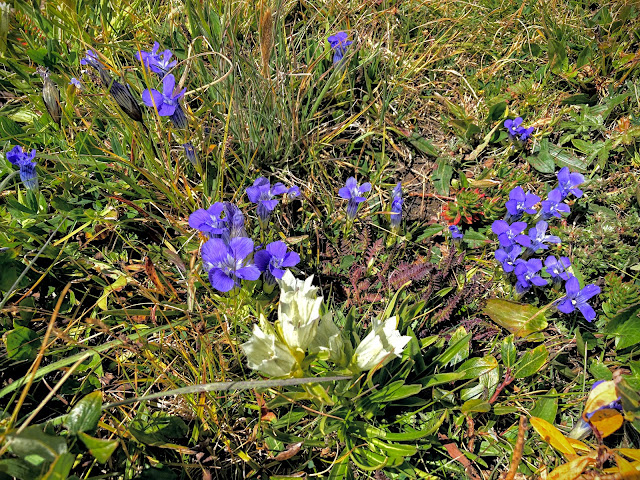 There were wildflowers by the spring – cream colored Indian Paintbrush in the foreground.

We reached the ridgeline that forms the divide at 12,400 feet between the Mora Valley and the Great Plains in front of us (to the east), and the Santa Barbara watershed (behind us, to the west). Santa Barbara Creek runs north-south through the center of this part of the Sangre de Cristo mountain range. The Truchas Peaks are on the horizon. South Truchas Peak (13,108) is the second highest mountain in New Mexico.

There are expansive views looking south along the flat, alpine meadows that form the top of the eastern Santa Barbara Divide. The Divide Trail follows this ridgeline south, until the divide curves to the right and forms the east-west divide separating the headwaters of Santa Barbara Creek, to the north, from the headwaters of the Pecos River to the south.

We met a couple of guys who were setting out on a six-day backpack trip down the Divide Trail to where it meets the Skyline Trail, which follows the east-west part of the Santa Barbara divide and then continues south to the Santa Fe Ski Area - all in the Pecos Wilderness.

Looking south down to the Divide Trail from Jicarita Peak.

Looking south, nearing the 12,835-foot summit of Jicarita Peak. Rocks like the one at left are propped up to form cairns that mark the path to the summit. 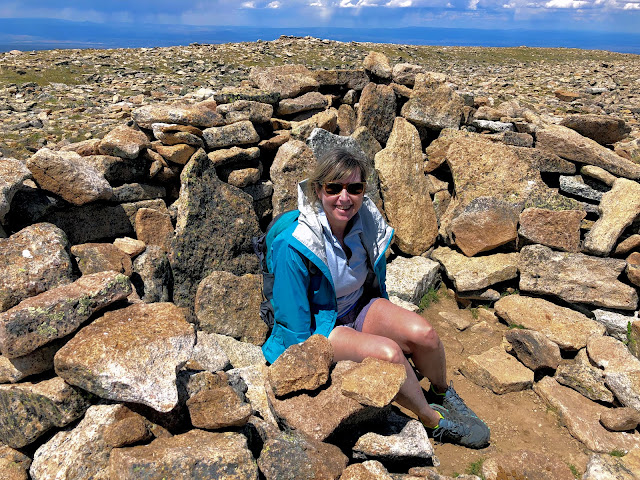 Enjoying a comfortable rock shelter on the summit of Jicarita Peak. 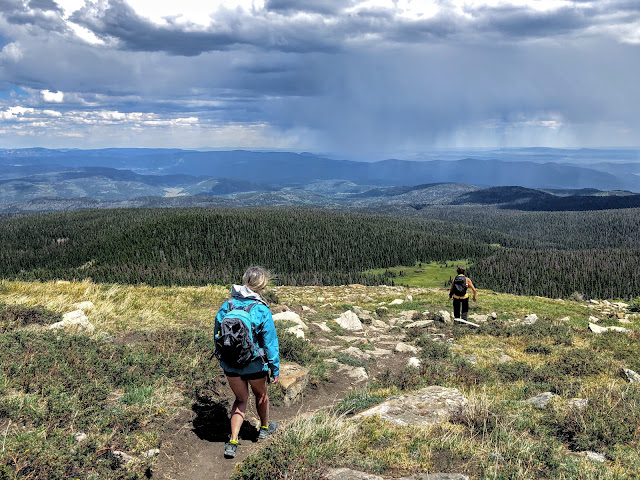 We headed back down from the divide as thunderstorms let loose over the Mora Valley in front of us.

8/9/20 with Cynthia McKinney and Emily Garcia