Crossing Over the Rim into the Valles Caldera

We hiked up into the lovely Cañada Bonito from the base of the Pajarito Ski Area. It is unique because it is one of the very few high mountain grasslands in the area that has not been subjected to livestock grazing since 1943, when the Los Alamos National Laboratory restricted land use. 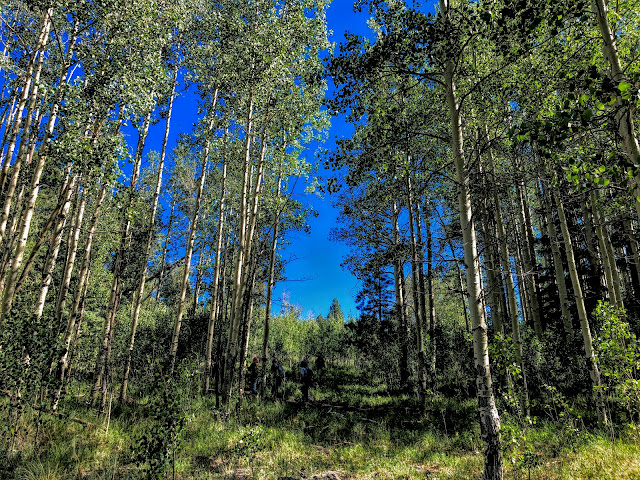 We reached the rim of the Valles Caldera at the head of Cañada Bonito. The trail turns north and follows the top of the rim through stands of aspen trees, reaching an elevation of 9,600 feet. 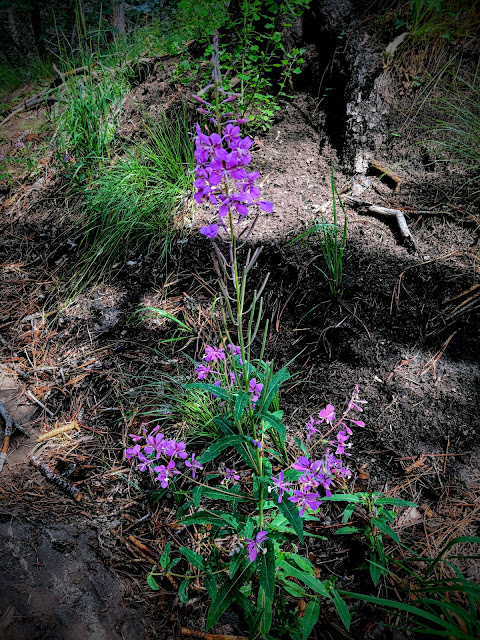 This fireweed was growing alongside the Pipeline Trail that drops steeply down into the bowl of the Valles Caldera.

The Pipeline Road delivered us to the Valle De Los Posos, a misspelling of pozos, meaning spring or well. 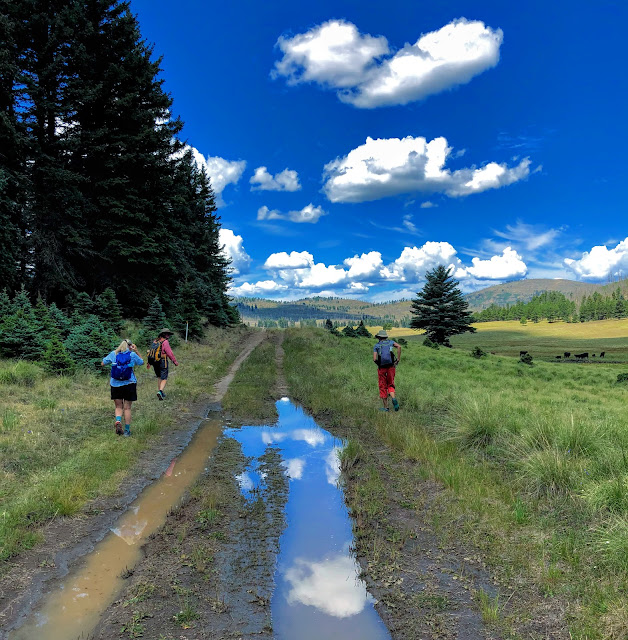 The circular bowl of the caldera, which is 45 miles in diameter, began to open up in front of us. Thunderstorms from the previous day left puddles, foreshadowing weather conditions later in the day. 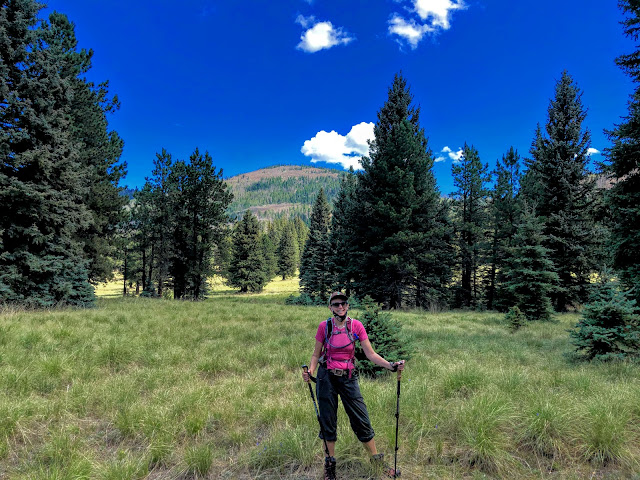 The domed mountains in the background are the Cerros de los Posos. They were formed by underground lava that pushed up the floor of the caldera about 100,000 years after it was formed by a massive volcanic explosion called the Toledo Caldera. This caldera formed 1.6 million years ago,. However, almost all evidence of it was obliterated by a second massive explosion in the same location that created the Valles Caldera on top of it, 360,000 years later. These mountains are one of the few visible remnants of the older Toledo Caldera.

The Valle de los Posos is the headwaters of San Antonio Creek, one of only two streams that rise inside the Valles Caldera. San Antonio Creek runs counterclockwise from here around the caldera to San Diego Canyon, which cuts through the south side of the caldera's rim, allowing it to flow south until it merges with the North Fork of the Jemez River – the only other stream that rises inside the caldera.

The North Fork of the Jemez flows clockwise around the caldera. When it meets San Antonio Creek coming from the opposite direction, the two merge to form the Jemez River, which flows south from San Diego Canyon to the Rio Grande River. 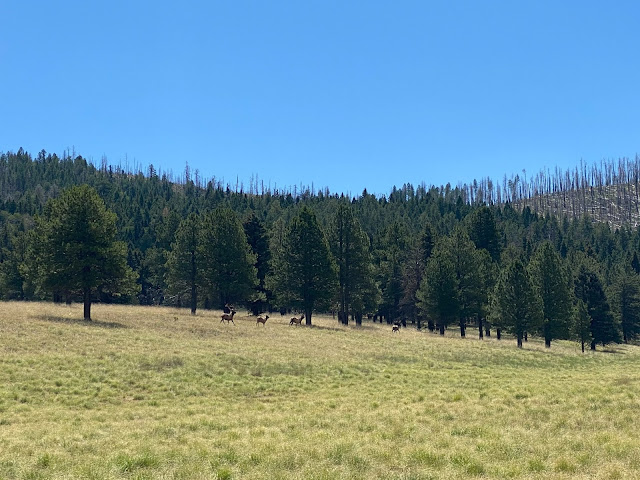 Four young buck elk came running up behind us. They turned abruptly as they approached and headed into the ponderosa trees at the edge of the valle. 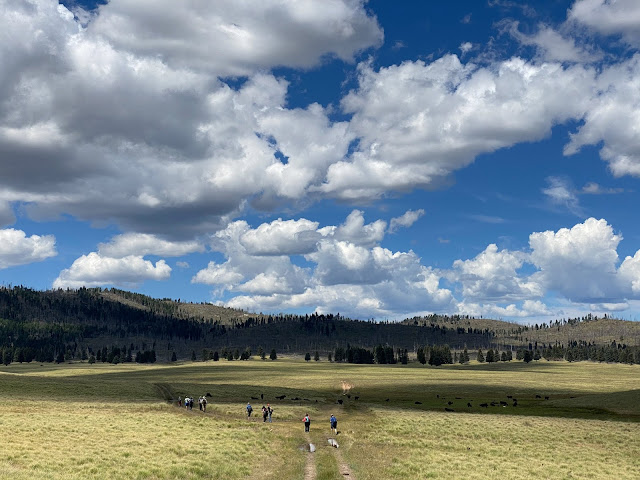 At this fork in the road we turned south, heading in a clockwise direction toward the headwaters of the North Fork of the Jemez. The road going straight follows San Antonio Creek on its counter-clockwise journey through the Valle Toledo and Valle San Antonio on the north side of the caldera.

Heading south, we see volcanic domes that fill the inside of the caldera on the horizon. 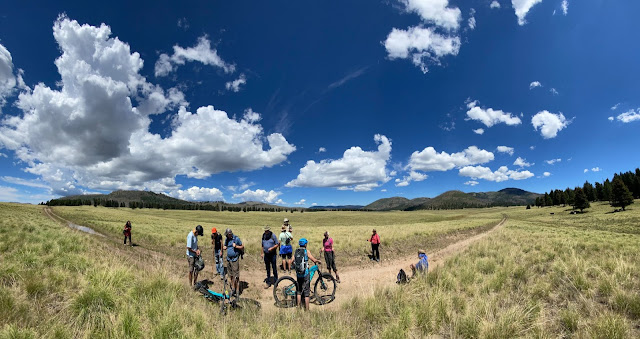 We met up with two of our party who came to meet us, riding bikes starting from the end point of our hike. Their route across the floor of the caldera was fairly level.

High noon in the Valle do los Posos: we followed the road on the right which climbs to the gap in the trees where a low saddle divides this valley from Valle Grande to the south. The headwaters of the North Fork of the Jemez River begins just over that ridge, where we stopped for lunch. 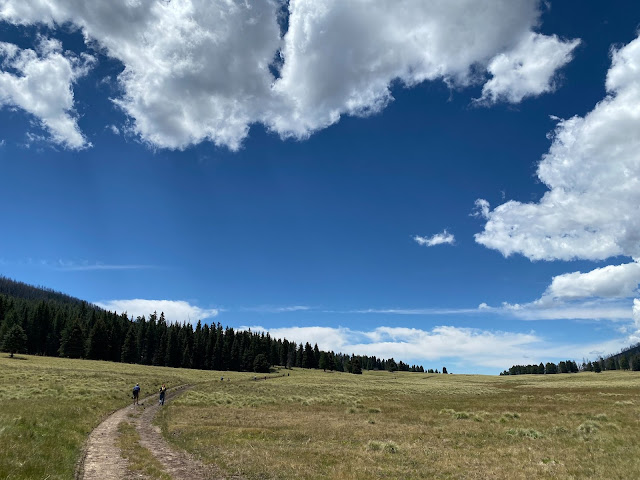 Lunch is on the horizon. 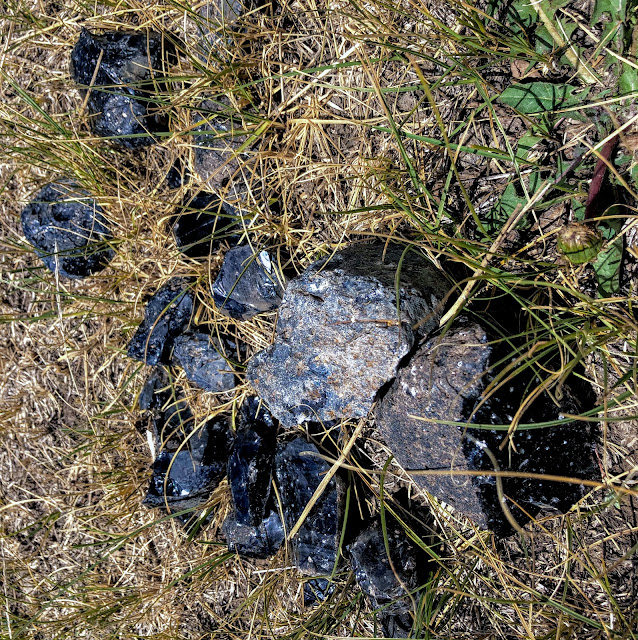 Along the way, we passed scatters of  obsidian, including these large chunks. The volcanic eruptions of the Valles Caldera produced high quality obsidian for making sharp tools and weapons, so much so that people have been collecting it for 11,000 years. This makes it one of the most significant sources of cultural obsidian in North America. Arrowheads made from this obsidian have been found as far away as western Mississippi.

Cooling afternoon thunderstorms caught us before we could finish our hike. 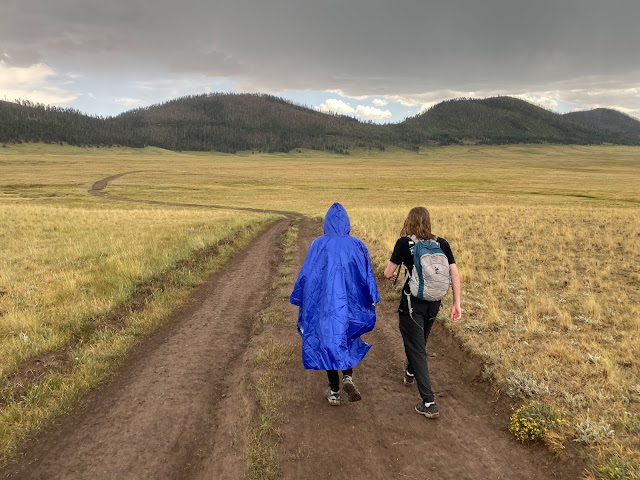 Crossing the Valle Grande to the south rim. . . different approaches to getting wet. 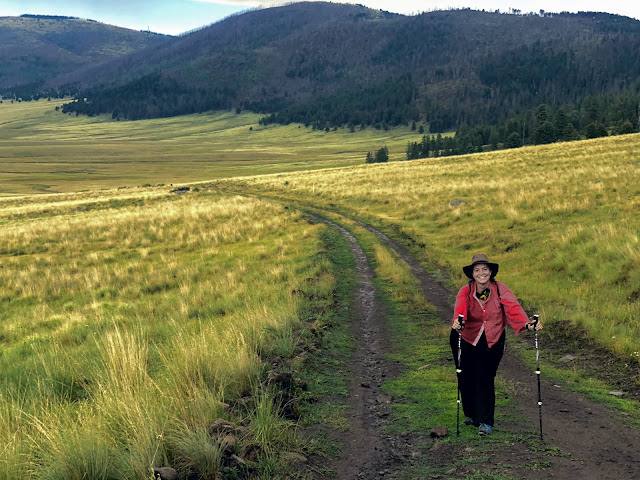 Completing this 9-mile hike gave us a glowing sense of accomplishment.